You’re a newly-hired security guard for a local franchise of the mostly defunct Dreddy’s Pizza Palace children’s entertainment chain. You used to come here all the time as a kid. Now as an adult, this place feels wrong... cursed. Ghosts of the past haunt you, the animatronics are stalking you, and reality is breaking around you. Still, you press on - rent is due soon and this is the only job you can get right now. Can you survive your memories of the past brought to life by a dying, haunted arcade?

One Night at Dreddy's is a solo game of economic horror, inspired by Five Nights at Freddy's and Silent Hill. It was written for the Wretched & Alone Jam. To play you'll need a deck of cards, some d6s, and a tumbling tower. It makes changes to conventional Wretched & Alone design so that the gameplay is still focused on journaling and survival horror, but there is a greater focus on hope and there are greater odds of making it out alive.

The COLOR edition comes with stylized background and text colors for aesthetics. The B&W edition sets text in black on white background for easier reading. The PRINTER edition replaces the front and back covers with plain text in black and white to be printer-friendly.

This work is based on The Wretched (found at http://loottheroom.itch.io/wretched), product of Chris Bissette and Loot The Room, and licensed for our use under the Creative Commons Attribution 3.0 Unported license (http://creativecommons.org/licenses/by/3.0/).

In order to download this game you must purchase it at or above the minimum price of $8 USD. You will get access to the following files:

"H-hello? Uh...Hello hello? I, uh, wanted to leave a review here to give you some insight on this game I played..."

I recently finished my first playthrough of One Night at Dreddy's and felt compelled to leave a review with my thoughts!

Much like the base game itself, One Night at Dreddy's places you in the shoes of the intrepid Night Guard, tasked with keeping an eye on the place and keeping yourself alive long enough to get out of there.

One thing I really appreciated about this game was its exploration of economic horror, which I feel is an underrated subgenre of horror that deserves to be explored more. The game truly makes you feel like your in the shoes of someone desperate and fighting to stay alive - all for a night's worth of meager wages. It's also a subtle exploration of corporate corruption and exploitation - you are told nothing of what will happen to you, and suddenly find yourself confronted with a situation where your options are to die at the hands of an animatronic - or die more slowly at the hands of a system that does not pay workers what they're worth for the dangerous job they must do. This was never deeply explored in the games themselves - and given the recent direction the FNaF franchise has gone in, I think this serves as both an excellent game to those who love the games AND a critique of capitalism.

A couple of bits of constructive criticism:

- Ensure that any cards with special instructions are very clear on those instructions. Example: I drew the King of Clubs before drawing the Queen of Hearts. I wasn't sure if I had to return the King to the deck remaining or if I had to remove a token. I ended up doing both on my playthrough only because I completely forgot which one I was going for.

- I would personally recommend breaking the game down into Nights as oppose to Hours. I believe I ended up playing a 13-14 hour night; however, depending on how the game goes, it might end up being even longer than that. While the game does mention that both time and the restaurant are warping and twisting, it seems to me that at some point the player would lose track of time if they're in there for too long.

All in all, these are just nitpicks for what is otherwise an excellent solo journaling role-playing game. If you have nostalgia for the older FNAF games, a deep relentless dislike of capitalism, and a desire to support a great gamemaker, consider picking this up!

"...Yeah, they don't tell you these things when you sign up. But hey, first day should be a breeze, I'll chat with you tomorrow - and remember, only pull from the tower when absolutely necessary. Gotta keep it standing. All right, goodnight!"

I absolutely love this game! Color Spray Games did an outstanding job. ❤ Would anyone be interested in reading if I post my character's journal on social media when it's finished?

This seems like a good idea. But I have camped for months and can't get a community copy

Unfortunately, community copies are only created when people purchase the game and sales for this game are low. I do hold sales on my games often (this game was 50% off for Halloween), so you may be able to budget for it then. If not, I hope someone buys a copy soon. 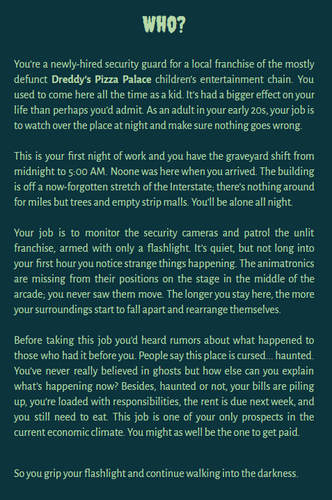 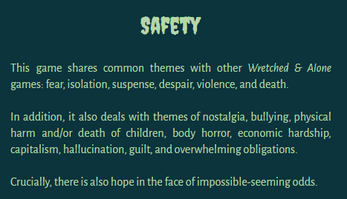 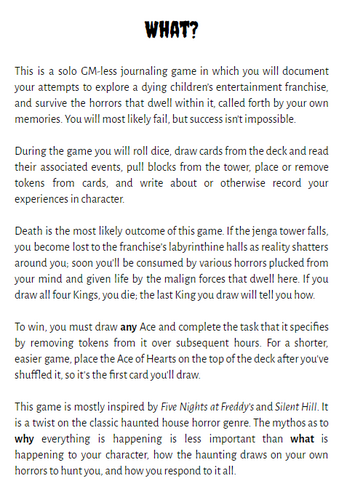 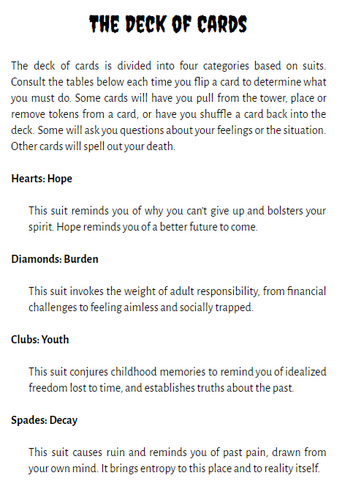