GOBLINS IN SHADOW is a roleplaying game about goblin resistance and revolution in an age of elven oppression. It’s a world of clockwork and magic, of smoke and shadow. Players will take on the roles of a cell of goblin revolutionaries, working to undermine the elves and humans who have conquered their homeland and built an empire on its corpse. They’ll advance their goals by taking on scores, missions that gather sympathy for their cause or take direct action against their oppressors, ending in a final attempt to assassinate one of the elven ministers ruling the city. To do that, they’ll need to avoid being caught by the Watch or the Hounds, the elite special police of the city; they’ll also need to balance their obligations to the various factions of the city, as well as their own personal obligations.

The rule of elves will be broken by goblins in shadow.

GOBLINS IN SHADOW is currently in Early Access, meaning it's a fully-playable game right now but needs work to achieve its final form. When you buy GOBLINS IN SHADOW you're helping me continue development on this concept in the future, and you'll be able to help by providing feedback on your experiences with the game.

GOBLINS IN SHADOW was originally written for #goblinweek2020.

In order to download this game you must purchase it at or above the minimum price of $20 USD. You will get access to the following files:

I would love to check this out, but am afraid to splurge that amount when it sounds like maybe this project stalled out? Does anyone know?

Are there plans to continue this project or has this been canned? Really love the premise and would love to see it more fleshed out.

Great game. Loved playing goblin rebels and walking away from explosions into the darkness. It was so much fun.

Goblins is a Forged In The Dark with a Styx/Of Orcs And Men/Spire feel to it. It's a dark fantasy about being partisans fighting against a government that feeds on your people, and it's got a very consistent tone and atmosphere.

However, the first thing that jumped out to me about it is how good it is at explaining things clearly.

There's an economy of language at play here, where somehow the book never uses more or less words than it needs to, and it never uses the wrong ones. I have no idea how the writer did that, but I'm impressed.

Setting-wise, Goblins takes place in an elven/human city built on colonized goblin/orc land. Elves eat wealth and also drink goblin blood out of a weird racist-logic belief that because goblins multiply fast and have short lifespans, they are also chock full of life energies. It's a solid frame to position them as the antagonists, and it's an interesting bit of nuance that the elves don't actually know if goblin blood is extending their lifespans. That said, it also aligns a bit with a modern conspiracy theory, and I had to keep mentally separating the two.

Mechanically, Goblins simplifies a number of elements from Blades, but they're mostly small things. Coin and Rep are collapsed into Fervor, which is shared communally. Absorbing consequences is non-random---you take stress based on your position. The Heat system locks down areas of the game map, rather than linking to a separate prison minigame. Etc.

Overall, these changes all help the engine match the style and tone of Goblins, and there weren't any that felt clunky to me. Despite being stripped down, Goblins is lean and effective.

I think I'd recommend this to anyone that likes Blades, or that hasn't played Blades yet but would like to. It's both effective as an introduction to the engine and as a boiling down of it.

The current document is 20 pages and feels quite complete, but it's also still in early access, and could potentially add more lore, culture, and other setting elements to flesh it out further.

This game let me play a goblin who's replaced their eye with the eye of an elf master to be able to see the magical bullshit they're hiding from us.

And then did a heist to discredit a racist, dog whistling Elven Cardinal who was about to rally up the populace into an unnecessary war. It was amazing. You should buy this game! 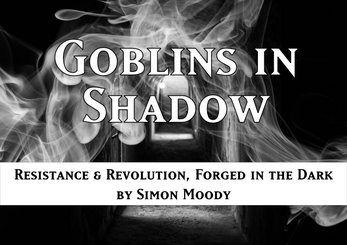 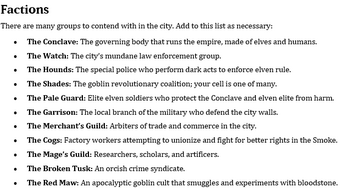 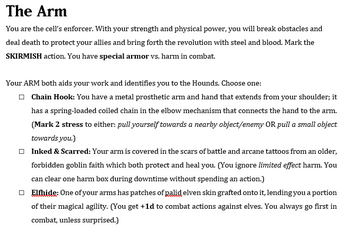